Check out Crossworld on Twitter for the latest news.

The Football Club saw some exciting changes for the 2018-9 season, with former players taking on responsibility for coaching and organising the side for our weekly training sessions and matches. The new set-up was off to a flying start with a 16-4 win in our first game, before winning five of our first nine matches, losing just once in that time. This form was harder to maintain through the festive period, and a difficult run saw us slip to 11th place in the league table by March 2019. 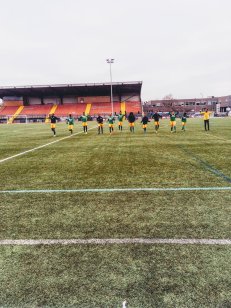 But with plenty of time left to correct things on the pitch, off it we continued to strengthen our relationship with Clapton CFC, who raised £300 for Crossworld during their 3-0 win against Chipperfield Corinthians in February. Thanks again to the mighty Tons!

A strong finish to the 2017-8 season saw the Football Club finish fourth in the league with 44 points. After a well-deserved summer break, we warmed up for the 2018-9 season at the Clapton Ultras’ Proudly East London tournament in Walthamstow. Punctual as ever, Crossworld were the first to arrive in the driving August rain. After playing a friendly against a team from The Plough pub in Bristol, we won two of our tournament matches and drew the other – against sides from Enfield, Bristol and St Pauli in Germany. The event was welcoming and friendly, with a good rapport between the teams. After six hours in the rain, the Crossworld players & staff took the opportunity to dry off and sample the local Turkish cuisine – rounding off a great day out. 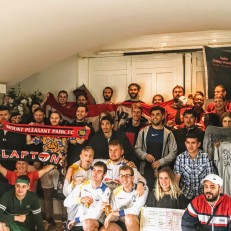 The Football Club had a mixed end to 2017, with three wins and three defeats in November and December – followed by a 2-2 draw against FG FC in the opening fixture of 2018. Having played 12 games so far, it was our first draw of the league season, and it was a typically topsy-turvy affair. The result leaves Crossworld fifth out of 14 in the table, 8 points behind the joint leaders. We have beaten three of the four teams above us, so there is a mood of focused optimism in the camp (see below) for the second half of the campaign. ✊

After a good start to the 2017-8 season saw the Football Club win four of their opening five games, Crossworld endured a difficult two weeks. First, despite an excellent comeback from 3-1 down, we succumbed to a late sucker-punch against the league leaders. Then, perhaps reeling from that defeat, the team suffered a 3-1 defeat in a stormy match against old rivals Dynamo Santos, leaving ground to make up in the league. The squad, led by our three player-coaches, are determined to put this right in the coming weeks.

For the 2016-7 season, senior players adopted more proactive roles within the Football Club. Several took responsibility for helping to run our weekly training sessions on Thursdays, as well as our competitive matches on Saturdays. After a difficult start to the season, the approach paid dividends in early November with our first win of the season, a comprehensive 4-1 league victory over History Old Boys at our home ground of (Fortress) Tooting Common. Five wins in a row followed, and Crossworld kicked on from there, finishing third in a league of 12.

In July 2016, Crossworld celebrated its tenth anniversary. To commemorate this milestone, we held a tournament in Kennington Park featuring 30 young people who over the past decade have helped make Crossworld what it is. Several generations came together and worked as a team, embodied by the winning side, who recovered from a heavy opening defeat to lift the tournament trophy. The team featured some new recruits – alongside the very player who scored Crossworld FC’s first competitive goal in 11-a-side football!

Following the football, speeches were made by coaches, volunteers and players. Special thanks were rightly given to the Brian Clough and Peter Taylor of the Football Club, Jonny Howard and Ben Bryant. The dynamic coaching duo have put a huge amount of work into building Crossworld’s 11-a-side team, and they took the opportunity to outline our plans for the future and the role of the senior players in helping deliver them.

It was a fantastic occasion that left everyone at the charity feeling grateful to all the volunteers and young people who have made the charity such a success over the last 10 years. Here’s to another decade of Crossworld. 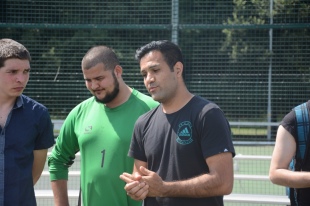 The 2015/6 season contained some high points – with the Football Club winning 2-0 against Brewery Tap, the very same side who broke Crossworld hearts in the previous season’s cup final penalty shootout at Wembley FC.

We are recruiting a new coach for the Football Club! Download the full job specification here, but if you are interested please email crossworldlondonfc@gmail.com. And if you’re on Twitter, why not tweet us too?

We’re delighted that the Friday Project received funding from Children in Need at the end of the 2014/5 season. This will cover costs for the upcoming year, once the project returns from a well-earned summer break in September.

In the autumn of 2014 we worked with talented filmmaker Tom Magnus on a Crossworld video. The footage gives a brief insight into the work we do and the impact it has – as well as showcasing some swashbuckling attacking football and words of wisdom from the squad. You can watch it here.

In November 2013, just over a year on from our last summary report (see previous news item), we have again surveyed our young people in order to assess the impact Crossworld’s Football Club project is having on their lives. Over the past year we have developed a new method of measuring our impact, and we are very proud of the resulting document. Read it here:

In our second ever cup final, at the prestigious Wembley FC (recently home to such legends as Ray Parlour, Claudio Caniggia, Brian McBride and Graeme Le Saux), Crossworld lost 1-5 to Hampstead Hawks on 1st June 2013. Having done well to reach the final off the back of some strong late season form, the result was disappointing – but safety from relegation has been assured with two league games to spare.

We have gained a grant from Sport England to run new activities, which we have developed based directly on feedback from our young people. This has allowed us to:

We have also secured funding from Children in Need to run the Friday Project for the next two years.

The Friday Project team has entered two competitive football tournaments, and in the latest reached the semi-final. The side was coached by Crossworld volunteers Julian and James – and AC, a Crossworld player who recently completed his Level 1 coaching badge.

More and more Crossworld players are now getting involved in coaching – with four or five having done so already and several more looking to in the coming months.

In summer 2012, we put together a report evaluating the impact of Crossworld. The report can be downloaded here: